All men are broken
Broken men break their children.
Who grow up to be broken.
Misty Edwards – All Men Are Broken

What do Asian men need most? If you are anyway acquainted with Asian culture, then you already know the answer–respect.

Above love, above success, riches or fame, Asian men crave respect. Perhaps as some of you experienced, the beginnings of how I reached this conclusion started in the home.

In my family, I learned that the resolution to family conflict was simple-respect your dad. My dad could be dead wrong about anything, but you were to never disrespect him, to dishonor him, or to question him. It is a frustrating yet intriguing experience–to see the need for respect to be so great so as to blind a person.

This need I saw in my dad, I saw in other Asian male figures. And it manifests in a variety of ways. We are quick to critique, but slow to give praise. There’s a tendency to be dominant, to be honored, and to be favorably seen by others. They have a need to be deferred to, for their opinions to matter, and for their ways to be established. When pushed to the limit, you will see the true colors of their pain-“Don’t disrespect me.”

In a larger community context, this drive for respect can often permeate in the culture of Asian American churches. It produces god-like male pastors who sit at the top to be adored. A culture of control and a culture of hyper-performance are birthed from the place of insecurity and grave need. Young leaders fail to flourish in those environments, for the process of their promotions is stunted by the lack of affirmation given, and the threat perceived by their rising.

It is easy to sit here and point fingers at ways that Asian males are broken in regards to respect but I soon discovered that this gaping hole existed within me. It plagues me in subtle ways, as if it were written in my DNA. And so the saying is true-the sins of the father continue generation after generation.

As an Asian male adult I see this crave, this dying need to be respected within me. I see the people I disciple, mentor, or lead and it is hard to take the posture of Jesus of serving them and making them great because what I really want is for them to serve me and tell me that I’m great. I want them to remember that it was I who was wise, mature, or anointed.

I reflected on all the days of my youth and how I chased after girl after girl, wishing the most beautiful girl in the world would one day rescue me and tell me who I was. That perhaps if the world saw me with her then the whole world would know how great I was, for her value would rescue mine. And the painful reality was-they were a broken cistern, they never told me who I was.

I found that my job as a leader who makes other leaders requires that I affirm others in who they are. That my voice should give them life. However, it is not the skills that are lacking, for words are easy to craft. But it is the empty fuel tank in my heart. I had very little to give to others what I did not have for myself.

For if I can only give what I’ve received, how can I give to others? My dad never respected or affirmed me growing up-how could I give it to others? How can I reproduce what is not present, what has not been given?

And then I realized these burning questions form the aching quintessential question that many Asian male figures must ask-from where should we gain our respect? And how we can give if we have not been given?

And because we are bereft of answers, this tragic irony exists:

Instead of being the father who pours affirmation into the son, he demands it. The older generation feeds off the younger generation instead of feeding it. The male church leader demands respect from their congregation instead of building it. We should have fed others but we are still feeding! We are still starving as adults, wishing someone would truly tell us who we are. We are older, gray-er, taller, yet still insatiably groping in the darkness for a cure for this poverty of respect.

Asian men, can you see it? We are paupers and beggars of respect and affirmation. Beggars will get food in the most remedial and poisonous of ways. We maintain this sick hunger because the tables we eat at in search for affirmation and respect do not feed us.

And so we are tempted to walk life lowly. Once having a calling for leadership, we are dominated by others, and lose the voice of our own. And so we create atmospheres of control, performance, and honor-for what we lacked in ourselves, we hide it by demanding from others.

If but a brief moment we could reflect on all our Asian traditions, is it possible that we have developed an entire culture of honor and respect based on this enormous deficit? Could it be that all our bowing, our expectations of deferrals, and honorific requirements are meant to fill this need, and the culture of unhealthy honor perpetuates because the need is never satiated?

This is what I call the crisis of respect for Asian males. And God help us if we are to ever be cured.

As always faith comes to the rescue. And God is the answer for all our curses. This revelation I now share is precious to me because it continually sets me free.

The need for respect and affirmation, as I now have revelation of, is really rooted in this all important existential question: Who am I?

All our broken cravings of respect and affirmation come from an insecurity of who we are. And so we seek it in porous ways-the respect of those younger, those in a lower social hierarchy, the attention of women, the addictions, and cravings for someone to notice us.

Identity is a rare commodity in our society, and we have money-making industries built around seeking the answer to this question, “who am I?” Am I the popular kid? Am I this type of hobbyist? Am I this profession? Am I of this appearance?

Yet to the question of “who I am,” lies the even more important question, “whose I am?” The answer to the latter will certainly answer the former.

For identity of a thing is revealed in the purpose given to it. And purpose is revealed in the One who purposed it. And so I believe that all our aching questions of identity are all unequivocally and wholly answered what our heavenly Father thinks of us.

The Bible has many things to say about not just what we do as Christians, but who we are as Christians. Asian men (and many Christians, at that) often get tripped up in being consumed by what we are to do as a replacement for who we are because we are unacquainted with people (especially authority figures) telling us who we are.

And so it is the commands of God that we may need to temporarily set aside in order that we may hear the whispers of Him:

You are God’s beloved son.
You are chosen from before the creation of the world.
Your heavenly father loves you dearly.
He wakes up every morning to see how you’re doing.
The pains of your heart are acquainted with him.
You are anointed, gifted, and his favorite one.
There’s nothing you can do make him love you more or less.
You are God’s favorite person to hang out with.
You are a friend of Jesus.
You are a partner with him in his work.

And so I have found that the times with God I’ve had in my life where we are meeting face to face, and him telling me, persuading me, reminding me, convincing me, and lavishing on me who I am have been one of the more healing and powerful things to happen.

As I’ve been continually asking him, “Daddy God, who do you say I am?” he answers in the most profound and encouraging of ways. Just the other day, I was taking a break from work, I heard the Holy Spirit whisper to me, “You’re such a great worker Phil!” With every affirmation he gives me, the bonds of my affirmation-starvation begin the loosen. I begin to be more free, more joyful, and more whole.

He re-parents me, and re-educates me. And in the process, he intends that the cycle of starvation in the generations would end with me.

Do you want to participate in the end of the poverty of respect? You need only to experience one thing-your daddy in heaven answering the question, “Who am I?”

May the answer to the question cure your heart and cure your church. May it feed you that you may feed others. May it give you boldness and joy. May it give you the power to affirm others, respect others, and built others up. And may it be so sweet and tender to the ears of your soul as it is now increasingly so for me.

For these words will truly end our poverty of respect among our people: “You are my beloved son, in whom I am well pleased.”

Yes, I really think this illustration depicts what I think Asian men need most: 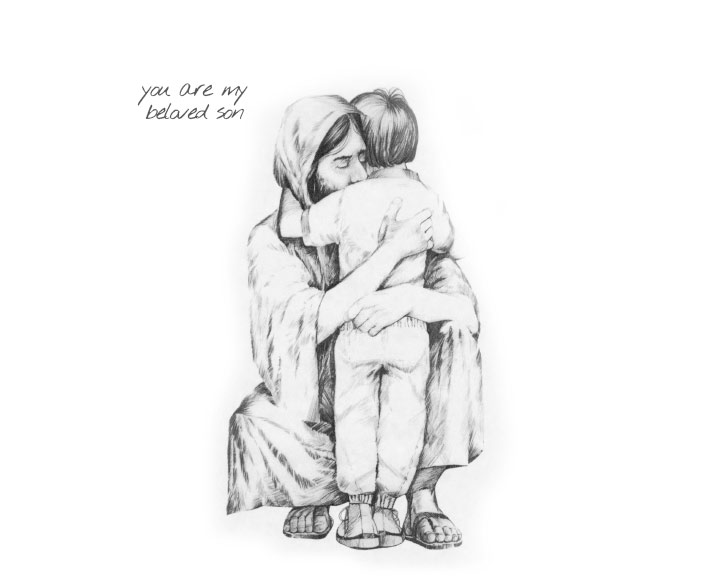 May this posture of receiving identity be true in your life and so cure your hungers.

Phil has been writing for 10 years. His passion is to grow in his love for Jesus to obey his purposes in our generation.

More posts from this author

Not Being Racist Is a Process

I'm Paying for This Meal! A Commentary on an Asian Honor Practice

No results for your search, try something different.